Vital centre for visual art in the North

We have programs for all ages, multiple rotating exhibitions, a gift shop and much more! What are you waiting for? Come on in and check out what Two Rivers Gallery has to offer you and your family!

Two Rivers Gallery proudly sits on the traditional, unceded territory of the Lheidli T’enneh. Operated by the Prince George Regional Art Gallery Association, the Gallery serves the Regional District of Fraser-Fort George, which includes the traditional territories of the McLeod Lake Indian Band, Lheidli T’enneh First Nation and Simpcw First Nation. The regional district consists of approximately 100,000 people across seven electoral areas and four municipalities, including Prince George with a population of 79,000. Two Rivers Gallery is contracted to provide services to the entire regional district and each year we travel with outreach programs and an exhibition to the District of Mackenzie (two hours to the north), the Village of Valemount (three hours to the east) and the Village of McBride (two hours to the east). The geographical area we serve is 51,083 ㎢ which is just shy of that of Nova Scotia.

The origin of Two Rivers Gallery lies in the Prince George Art Gallery which was established in 1969. The Gallery operated at this location until 1976 when the City of Prince George donated a small forestry warehouse on 15th Avenue that became the second location of the Gallery until July 2000.

The new Prince George Art Gallery opened in July 2000 as a purpose-built art museum. Its award-winning design was the work of Alberta architect Barry Johns. The beautiful building is a focal point for the city with architectural features echoing the geography of the region and referring back to the forestry sector on which the north was built.

With the new facility, the gallery’s name changed to Two Rivers Gallery of Prince George and Region to acknowledge a shift in funding from the City of Prince George to the Regional District of Fraser-Fort George, and to recognize an expanded constituency. Two Rivers Gallery is strongly supported in the community with multi-year service contracts with the Regional District, including core funding for operations and annual grants for outreach.

Two Rivers Gallery has become the centre for visual art in the north. The Gallery has developed a reputation for strong exhibitions featuring art by contemporary artists from across the country. Simultaneously, it has developed a well-rounded complement of public programs that support the experience and learning of art through a range of strategies aimed at every age group. From artists’ talks to school programs to studio workshops to extensive outreach, Two Rivers Gallery champions the positive impact of art in our lives.

Two Rivers Gallery received an A designation in 2007, recognizing that it functions according to the highest international standards of museum operation. This designation has facilitated the acquisition of numerous important artworks to a public collection that has grown from fifty to 425 artworks since 2000. During this time, the Gallery also secured multi-year operating assistance from the Canada Council for the Arts and core funding from the BC Arts Council. Consequently, Two Rivers Gallery has been able to develop an exhibition program that balances regional and national perspectives, and actively produces exhibition related publications.

Since its origin forty-eight years ago, Two Rivers Gallery has evolved into a dynamic and responsive centre of contemporary Canadian art. While valuing the traditional functions of an art museum: collecting, exhibiting and interpreting, it has aspired to more. Over the last twenty years the gallery has established an extraordinary philosophical framework where workshops and studio spaces are as equally valued as exhibitions for experience and learning. The innovative educational programs born of this philosophy complement exhibition programs resulting in deeper engagements with contemporary art and more vital connections between professional artists, makers and general audiences.

1949 – The Prince George Art Society was established. Members met in each other’s homes and in the basement of the old Civic Centre and arranged exhibits.

Two Rivers Gallery was designed by architect Barry Johns and opened in 2000. The design of the Gallery facade is inspired by the geography of the region, in particular the cutbanks. These sloping banks at the side of the rivers have been carved out over the years by the force of the water. The sloping roof and arching ribs that run along the front of the building echo these cutbanks. The boulders and shrubs in the landscaping represent the riverbed.

Many design elements speak to the importance of the forest industry in the region. The most distinct feature, the laminated ribs, are made from Douglass fir. Wood is also used in places where visitors will experience it directly, including the gallery floors, stairs and door pulls.The stair railing suggests deadfall in the forest. The metal casing that surrounds the chimney flue represents a mill burner.

The two main galleries terminate in a sloping ceiling inspired by exhibition spaces in the National Gallery of Canada. The second floor programming atrium is equal in area to that of the exhibition spaces. With 20 foot ceilings and huge work tables, a maker space and two smaller studios, the atrium is an environment conducive to experimentation and exploration through art.

The Gallery was designed using a “cocooning” concept with the exhibition galleries placed in the centre of the building to provide further protection from the external environment. Skylights can be revealed in the exhibition galleries for “daylighting” which is when natural light is filtered through the 2nd floor atrium similar to light-mixing attics of the 19th century Picture Galleries.

In alignment with Two Rivers Gallery’s name, branding, and emphasis on the creative process, “Streams” direct our strategic priorities and “Destinations” outline our goals.

Encourage lifelong learning through the arts

Create an environment for vigorous artistic and cultural expression

Provide opportunities for diverse experiences through participation and exhibition 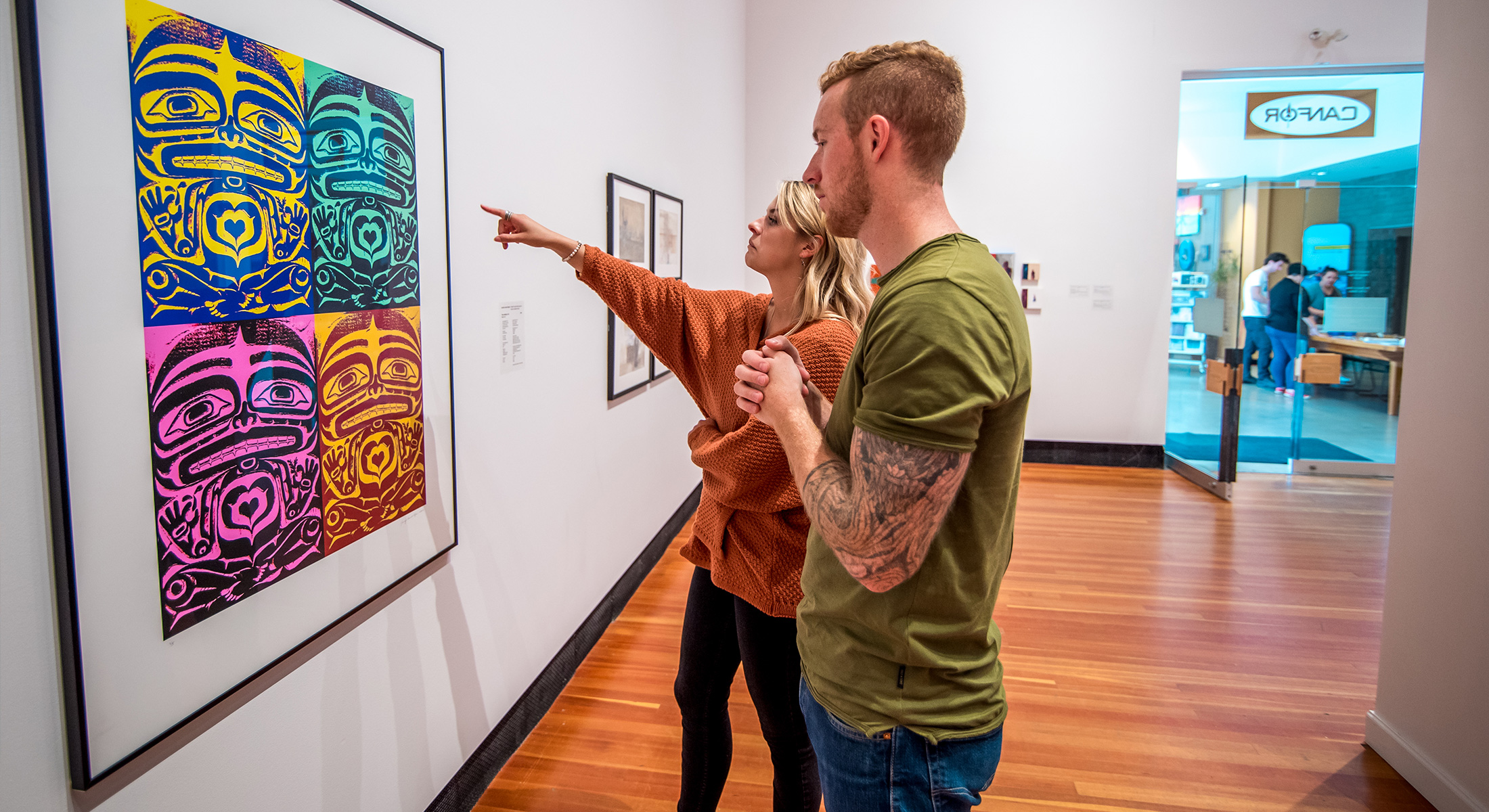